Access to the Foundation’s exhibition venue is free, up to the maximum capacity of 5 people. Once the limit is exceeded, you will be asked to wait in the outer courtyard.

GREEN PASS: You can access Foundation’s venues, events, guided tours and workshops only in possession of one COVID-19 green pass, in paper or digital format, issued in order to certify one of the following conditions:
• Have had the first dose of vaccine or the single-dose vaccine for at least 15 days
• Have completed the vaccination course
• Have tested negative for a molecular or rapid swab within the previous 48 hours
• Be healed of Covid-19 within the previous six months

With the exhibition Rosa in mano [Handful pink] of Nevine Mahmoud and Margherita Raso with Derek MF Di Fabio, from 11 September to 17 December 2021, the Fondazione Arnaldo Pomodoro presents the second appointment in the 2021 exhibition cycle of the Project Room, an “observatory” project devoted to the most recent developments on the international artistic panorama, this year entrusted to guest curator Eva Fabbris.

The set of exhibited artworks is a dance of positions and physical touches; between presences and absences, wholes and parts, Rosa in mano is an exhibition in which sculpture is offered as a celebration of the vitality of the body. The works on display have a marked tactile, even sensual quality, which is manifest in the choice of subjects and rooted in their executive nature. In the wake of figures such as Niki de Saint Phalle and Alina Szapocznikow, the bodies become fantastic and vital, physicalisations of desire in which sensations mingle.

Nevine Mahmoud (London, 1988 – lives and works in Los Angeles) and Margherita Raso (Lecco 1991 – lives and works between Basel and Milan) both root their practice in a melee with materials and techniques: sculpted or blown works for one, works on a mechanical or hand loom for the other. For Mahmoud the result consists of objects in their own right, which are markedly voluptuous representations of pieces of bodies or natural elements that present themselves as closed forms, self-referential sculptural worlds. Raso’s fabrics, on the other hand, stand as works without a stable, pre-established form: surfaces of great tactile and visual quality that occupy spaces hanging from the ceiling, clinging to walls, resting on found surfaces. The exchange between the two artists has expanded thanks to Derek MF Di Fabio (Milan, 1987 – lives and works between Perdaxius in Sardinia and Berlin). Di Fabio’s work often consists of workshops, the end result of which is of relative importance in object terms. Their poetic attention is shifted onto situations, onto how these can be listened to and interpreted.

Click here and listen to Cuscino, the audioguide created by Derek MF Di Fabio for the exhibition. 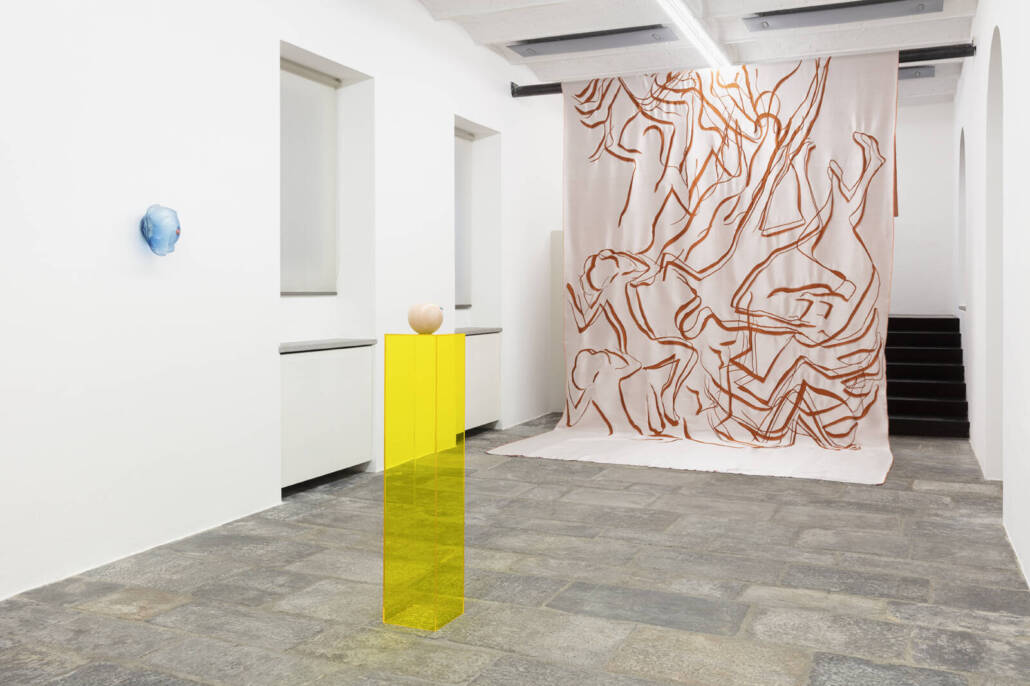 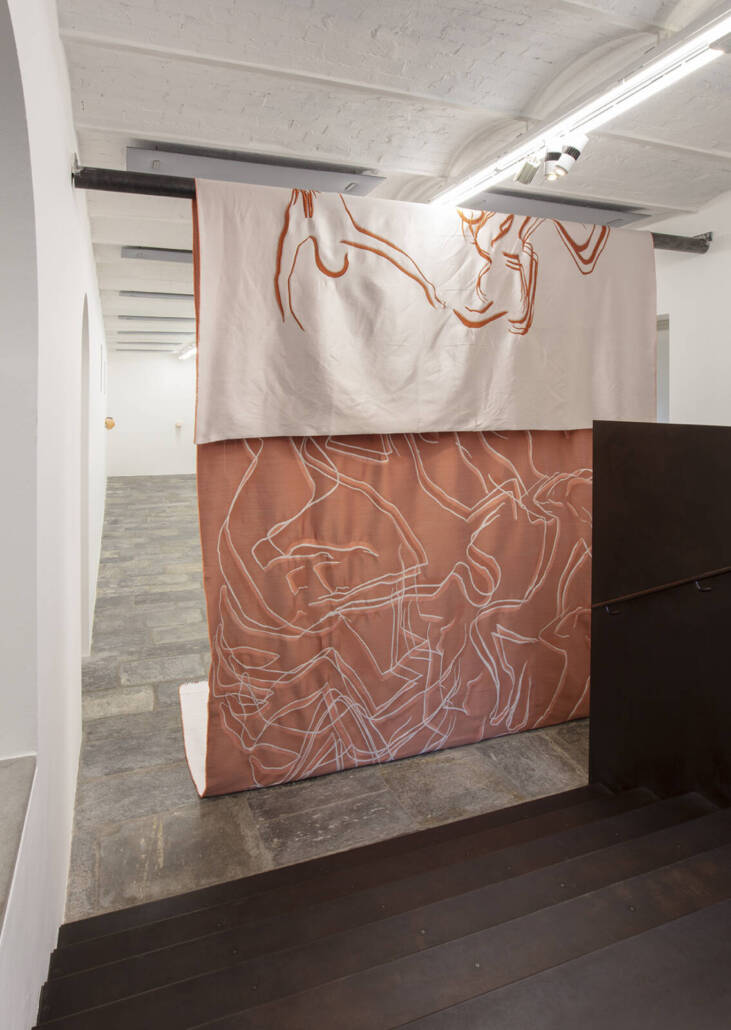 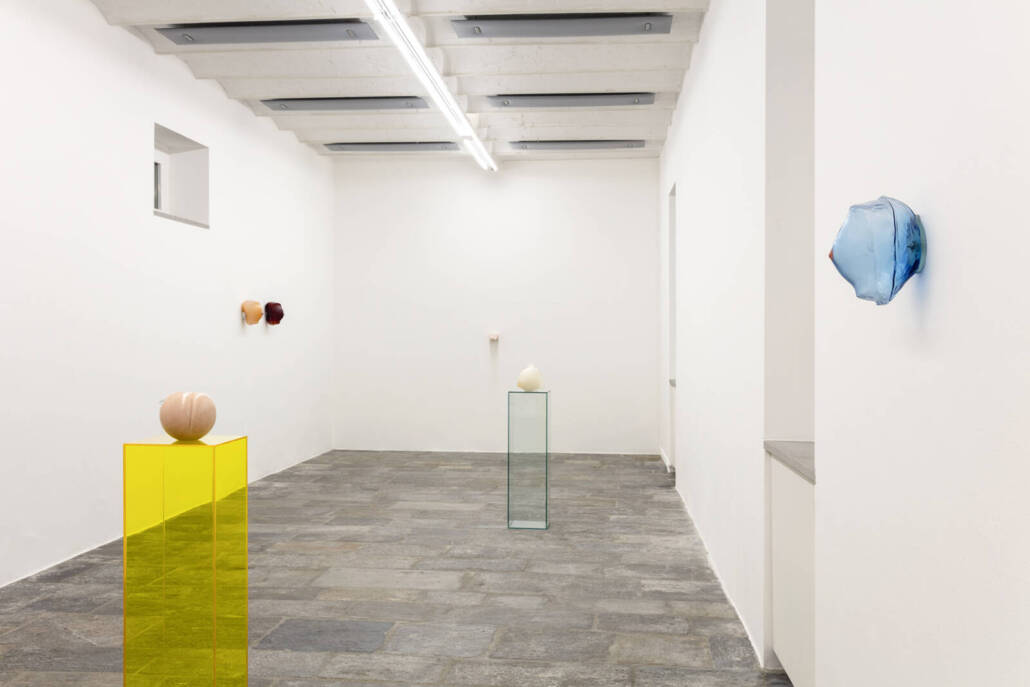 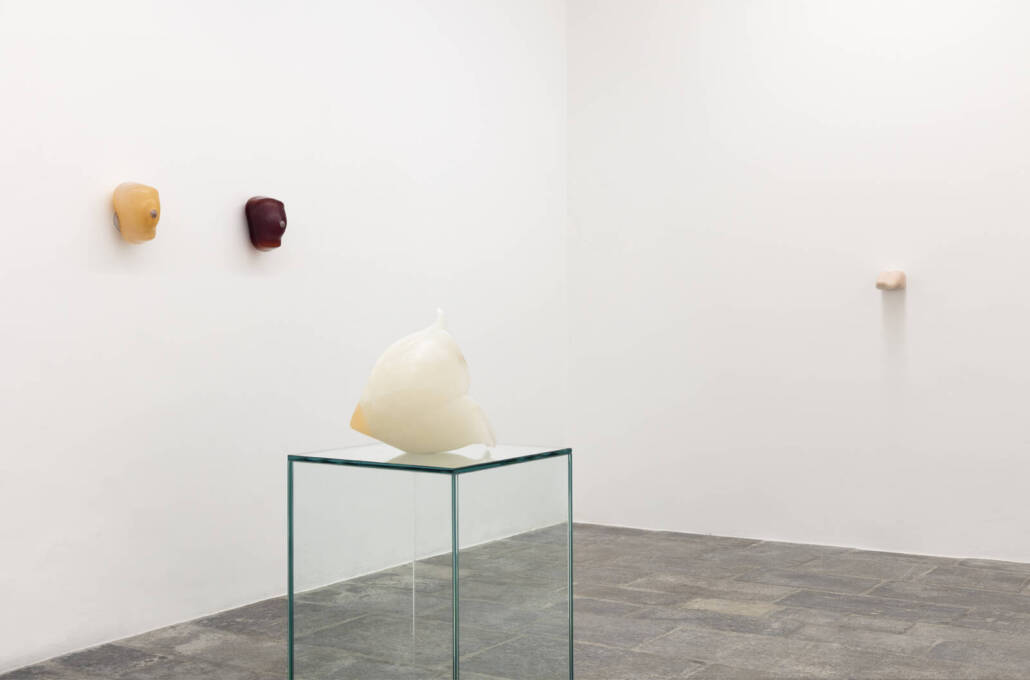 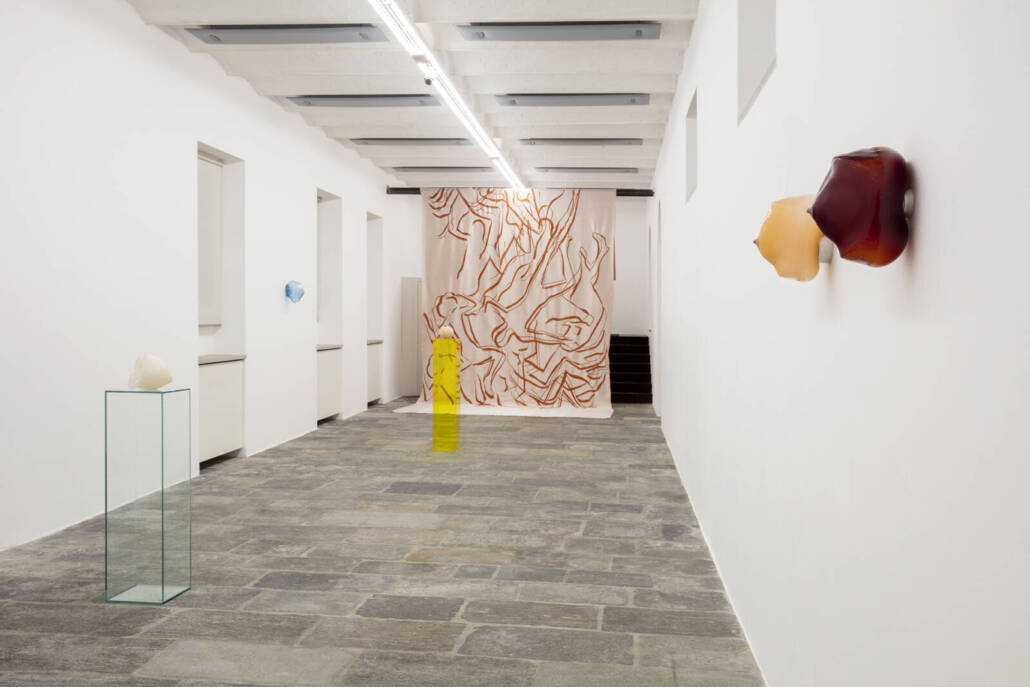